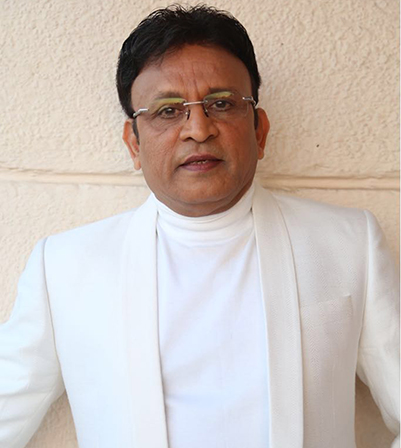 Annu Kapoor (20th February, 1956) is an Indian actor, singer, anchor, producer-director, and composer who was born in Bhopal, India, raised in various parts of India and finally settled in Mumbai. His original name was Anil Kapoor. He started acting at an early age. He worked as an actor in a traveling theatre company owned by his father. During this period he had to travel small villages and towns of Northern India to perform. He was the part of Parsi and Folk Theatre companies of post independent India. He performed lead roles in more than 250 Musical Folks and Parsi plays.

After performing for traveling Theatre Company and Parsi Theatres, he came to New Delhi in late 70’s and joined National School of Drama. It was at the National School of Drama he got a chance to work with eminent theatre personalities from all over the world. This is where he was introduced to the world theatre and literature. He performed major roles in plays like, ‘Antim Yatra’ directed by Barry John, ‘Three Sisters’ which was written by world famous classic writer Anton Chekhov and directed by Ebrahim Alkazi, ‘The Great God Brown’ written by famous American playwright Eugene O’ Neill, ‘The Zoo Story’ written by another famous American Edward Albee and ‘Ek Ruka Hua Faisla’ directed by his elder brother Ranjit Kapoor and several other plays.

In 80’s he came to Mumbai to make his mark in Indian Film Industry and he made his debut in the film ‘Mandi’ directed by legendry director Shyam Benegal in 1983. From here his journey started and in over three decades of his life in showbiz he worked in more than 30 films and generated wide applause from audience for his memorable performances.

A major turning point came in his career in 1992 when he hosted a musical show on television named ‘Antakshri’, where he became the pioneer of musical reality shows on television in India. He was the host for 12 glorious years for a show on Zee TV called ‘Antakshari’. People from England, America, Canada, Europe Pakistan And Africa still adore him as the Music Man of India. Show got immense popularity and ran for 13 long years on Indian television with successful TV ratings. Annu Kapoor’s anchoring, his knowledge of music and singing talent was widely appreciated and this made him as a brand identity of the show. Till date people cannot imagine ‘Antakshri’ without him. ‘Wheel Smart Shrimati’ is another show hosted by him, touched the highest TV ratings in the category of game shows in India. Besides these he proved his talent on television through his memorable performance as ‘Kabir’ the saint and poet of India in a TV serial telecasted on National Channel.

He directed and produced his first movie ‘Abhay’ in 1994, for which he received National Award. First time in Indian film history Till date Annu Kapoor has received 7 glorious awards which include the National Award for his role in Shoojit Sarkar’s film ‘Vicky Donor’ in 2012.

Annu Kapoor always proved his versatility and talent in his performances, which eventually established his credential as a power house actor and performer. Both, the audience and the critics have given their thumbs up to his performances.